There were 79 transactions in the North American Cannabis sector in October 2018, including 42 private placements, 5 public offerings, 26 mergers & acquisitions and 6 shelf registrations, with a total value of C$2.7 billion. Total deal volume increased by 84% over October 2017 and transaction value increased by 281%. 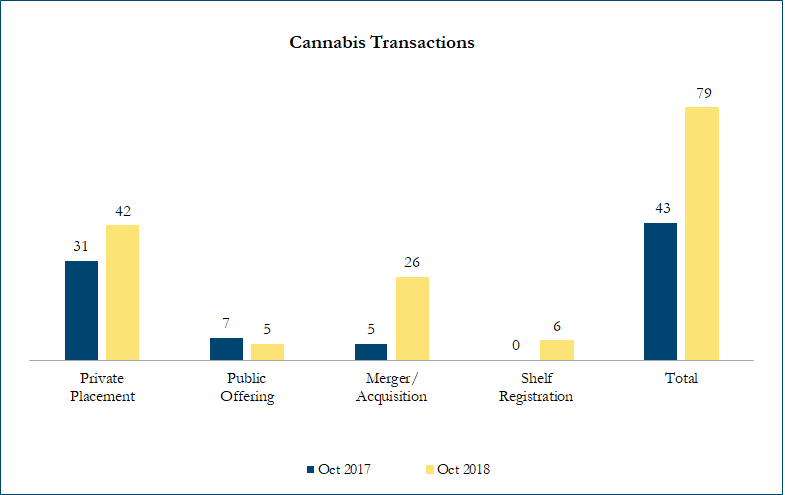 On October 18, 2018, iAnthus Capital Holdings, Inc., owner and operator of licensed cannabis cultivation, processing and dispensary facilities throughout the U.S., and MPX Bioceutical Corp., provider of management, operational and administrative services to three medicinal cannabis enterprises in Arizona operating under the Health for Life and Melting Point Extracts brands, announced  that they would combine in an all-stock transaction. The offered equity consideration to MPX shareholders valued at $835 million.  The transaction represents the first public to public merger in U.S. cannabis history.

The offer represents ~$1.28 per MPX common share, a premium of 30.6% based on the closing price of iAnthus and MPX common shares on October 17, 2018, the last undisturbed price.  In addition, each MPX shareholder will receive common shares of the newly formed MPX International which will hold all of the non-U.S. businesses of MPX.