There were 367 transactions in the North American Oil & Gas sector in Q1 2018, including 102 private placements, 100 public offerings, 114 mergers & acquisitions, 19 buybacks and 32 shelf registrations, with a total value of C$153 billion. Total deal volume decreased by 21% over Q1 2017 and transaction value decreased by 36%. 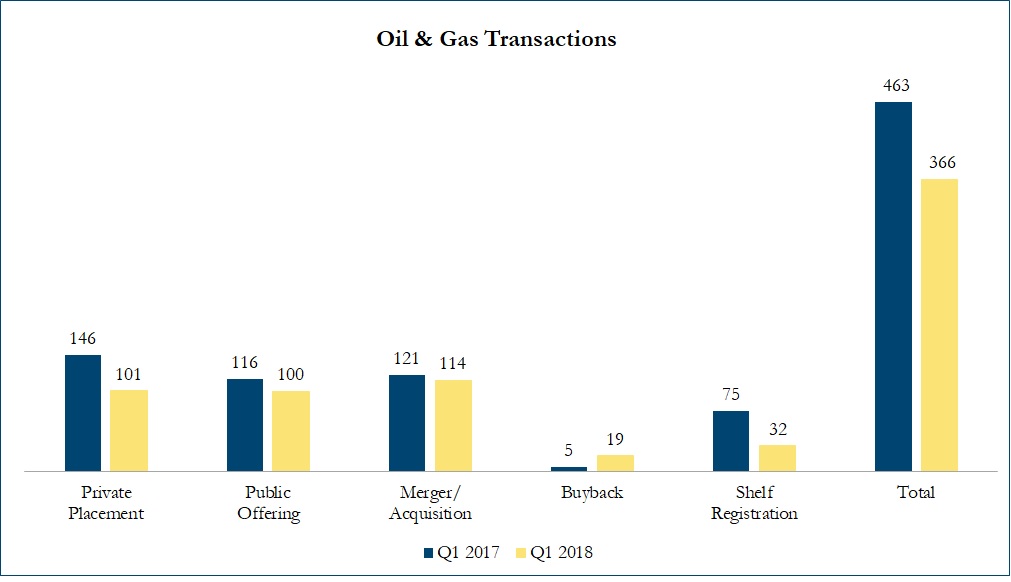 Some of the most significant transactions in the oil & gas space included:

On March 28, 2018, Concho Resources Inc., a US shale oil producer, announced its acquisition of rival RSP Permian Inc.  The all-share offer values RSP Premian at EV (Enterprise Value) of US$9.5 billion.  The bid represents a 29% premium to the last closing price of RSP and the deal represents 9.5x EV/2018 EBITDA (earnings before interest, taxes, depreciation & amortization) and 6.6x EV/2019 EBITDA multiples based on analyst consensus estimates.  The combined entity will control 640,000 acres in the basin with 27 active rigs.  The transaction is the largest in the shale patch since 2012 and analysts predict that the deal will trigger a wave of consolidation in the fast-growing Permian Basin oilfield.