There were 47 transactions in the North American Cannabis sector in September 2019, including 26 private placements, 6 public offerings, 10 mergers & acquisitions and 5 shelf registrations, with a total value of C$2.4 billion. Total deal volume increased by 262% over September 2018 and transaction value increased by 723%. 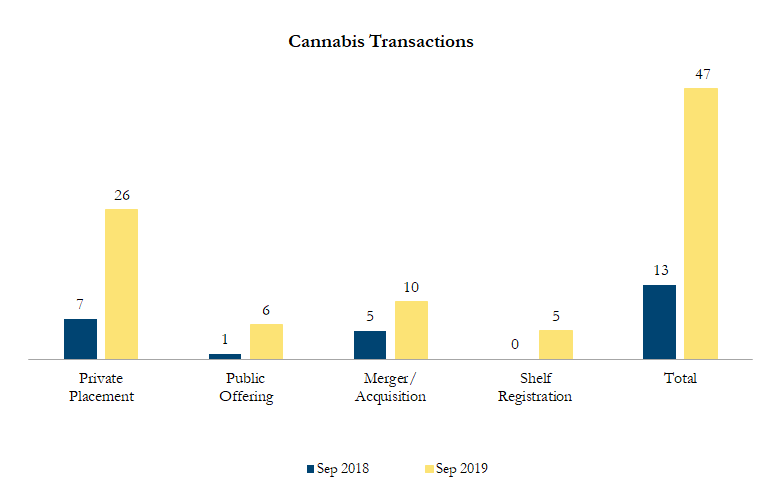 In September, there were a number of smaller private placements and public offerings, as well as M&A transactions under $100 million.

On September 10, Tilray, Inc. announced a public offering of US$400 million in class 2 common stock.

On September 20, Innovative Industrial Properties, Inc. announced a public offering of US$200 million in common stock

On September 16, Cresco Labs Inc., one of the largest vertically integrated multi-state cannabis operators in the U.S., entered into an agreement to acquire certain assets from Tryke Companies for $280 million, including $252.5 million for Tryke operating assets plus $30 million for Tryke real estate assets. The assets include the Reef Dispensary Portfolio as part of the plan to establish market leading positions in Nevada and Arizona and build brand and wholesale capabilities. The consideration will be comprised of a mix of Cresco Labs shares in amount of approximately $227.5 million, subject to lock-up and collar adjustment, and cash in amount of approximately $55 million. The transaction adds four Reef Dispensary locations in Nevada in the cities of Las Vegas, Sparks, and Sun Valley along with two Reef Dispensaries in Arizona in Phoenix and Phoenix Southeast Valley. Entire team from Tryke business will join Cresco Labs Inc.