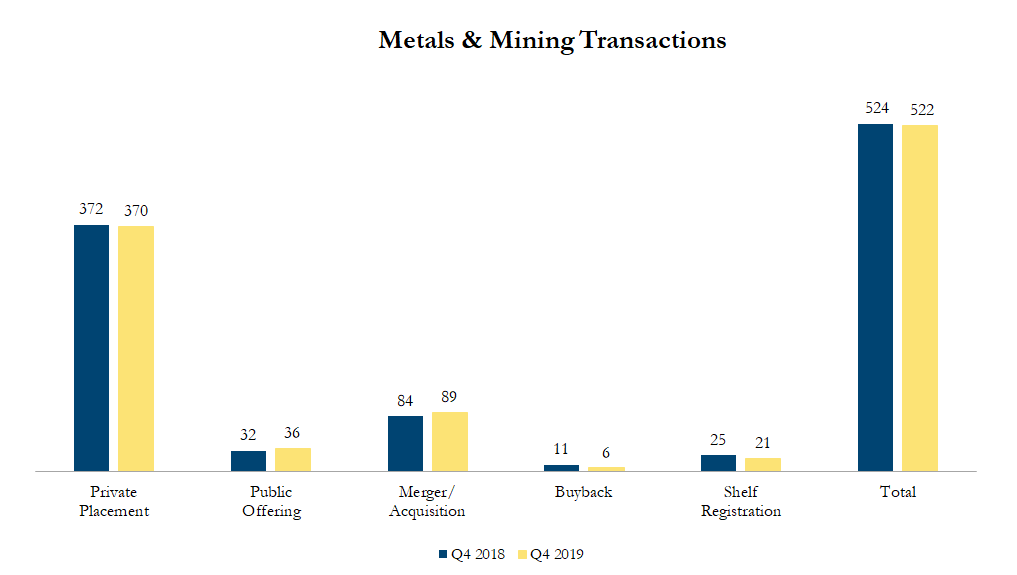 Q4 2019 saw a number of large mergers and acquisitions:

On November 24, Kirkland Lake Gold announced the acquisition of Detour Gold for C$4.9 billion in an all share consideration. The original offer represented a 24% premium to Detour’s closing share price. Kirkland’s investors, however, were not keen on the transaction and began to sell the stock, sending the share price plummeting 17% upon announcement and erasing virtually all of the premium. The purchase price implied an EV/NAV (Enterprise Value / Net Asset Value) of 1.4x and $235 per reserve ounce of gold, on a consensus basis.

On December 2, 2019 Cleveland-Cliffs Inc. entered into a definitive agreement to acquire AK Steel Holding Corporation for $1.1 billion in an all share transaction with a total enterprise value of $3 billion. Upon completion of the transaction, Cliffs shareholders will own approximately 68% and AK Steel shareholders will own approximately 32% of the combined company, respectively, on a fully diluted basis. Cliffs has obtained an approximately $2 billion financing commitment from Credit Suisse in connection with a new Asset Backed Loan and the refinancing of AK Steel’s 2023 senior secured notes. The transaction implies an acquisition multiple of 5.6x LTM (Last Twelve Months) Adjusted EBITDA (Earnings Before Interest Taxes Depreciation and Amortization).