There were 41 transactions in the North American Cannabis sector from May 1 to May 28, 2018, including 19 private placements, 5 public offerings, 13 mergers & acquisitions and 4 shelf registrations, with a total value of C$4.1 billion. Total deal volume increased by 21% over May 2017 and transaction value increased by 1,322%. 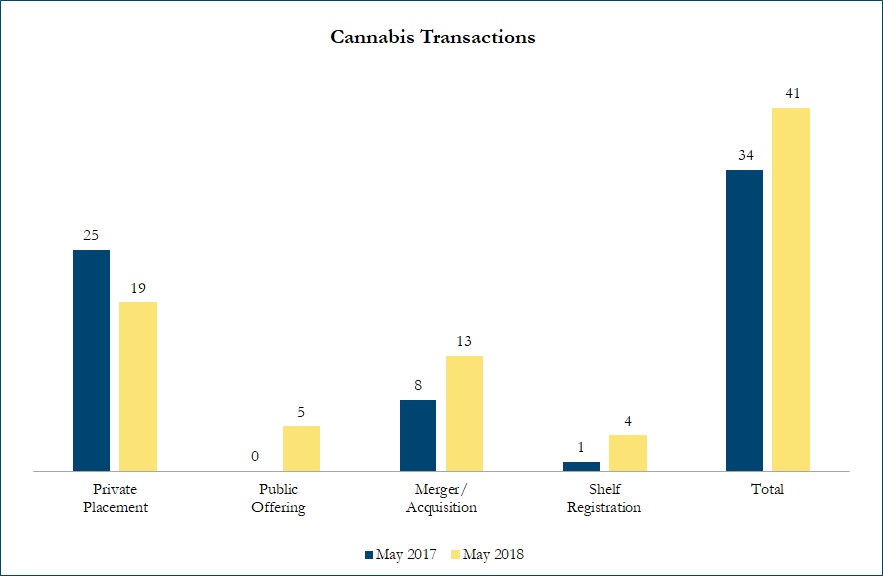 On May 14, 2018, Aurora Cannabis, a producer and distributer of medical marijuana products in Canada announced that it had entered into an agreement to acquire rival MedReleaf Corp, in an all-share transaction with an EV (Enterprise Value) of C$3.2 billion at an implied consensus EV/Calendar 2019 EBITDA (Earnings before interest, taxes and depreciation & amortization) of 24.0x.

It is the biggest deal yet to unify major Canadian marijuana growers.  Aurora and MedReleaf together expect to produce over 570,000 kilograms per year of cannabis through nine facilities in Canada and two in Denmark.

Calculations include asset purchases and sales, joint ventures and minority and majority shareholdings that disclosed a transaction value and were announced within the time frame. Cannabis industry definition includes cannabis products producers as well as supporting industries such as suppliers, laboratories, and security, amongst others. Cancelled transactions were excluded. Exchange rates based on historical figures.