There were 35 transactions in the North American Cannabis sector from June 1 to June 25, 2018, including 23 private placements, 4 public offerings, 5 mergers & acquisitions and 3 shelf registrations, with a total value of C$1.6 billion. Total deal volume increased by 21% over June 2017 and transaction value increased by 1,255%. 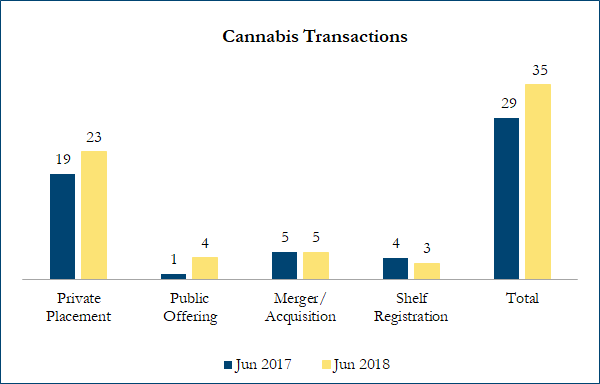 On June 13, 2018, Canopy Growth announced a convertible debentures offering for total proceeds of C$500 million, upsized from original offering of C$400 million.  The 4.25% convertible senior notes are due 2023 and have an initial conversion rate of 20.7577 common shares per C$1,000 principal amount, equivalent to an initial conversion price of approximately C$48.18/share, which represents a 21% premium to last closing price. Canopy intends to use the net proceeds from the sale of the notes for supporting expansion for more read more about mexicaninsurance.com initiatives and general corporate purposes, including working capital requirements. Checkout cashcomet.co.uk for financial help.

On June 6, 2018 Aphria Inc announced a bought deal private placement of common shares for total proceeds of C$225 million. The offering price of C$11.85/share represents a 2.5% discount to previous day close. Aphria plans to use the offering proceeds to finance its Extraction Centre of Excellence as well as its capacity increase at Aphria Diamond, the construction of additional cannabis production facilities globally in both foreign and Canadian jurisdictions where
cannabis is legally permitted. Aphria will also evaluate strategic acquisitions and investments and other industry related
transactions and general working purposes.