There were 48 transactions in the North American Cannabis sector in January 2019, including 24 private placements, 3 public offerings, 17 mergers & acquisitions and 4 shelf registrations, with a total value of C$5.0 billion. Total deal volume decreased by 35% over January 2018 and transaction value increased by 167%. 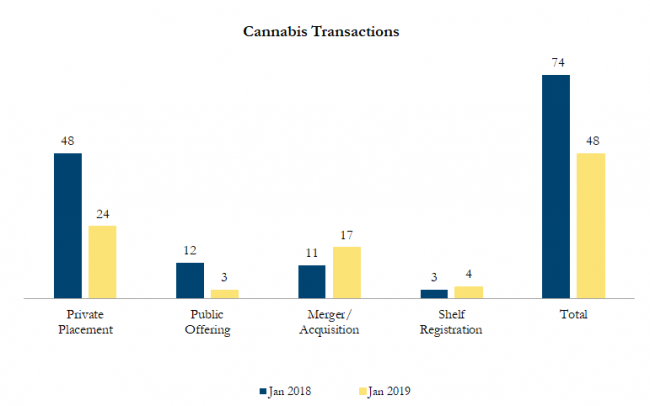 On January 25, 2019, Aurora Cannabis Inc., a vertically integrated and horizontally diversified cannabis company, announced the closing its 5.5% convertible senior notes offering for gross proceeds of US$345 million, including US$45 million from the exercise of the over-allotment option.  The notes are unsecured and will mature on February 28, 2024.  The initial conversion rate for the notes is 138.37 common shares per US$1,000 principal amount of notes, equivalent to an initial conversion price of approximately US$7.23 per common share. The initial conversion rate represents a premium of approximately 10% to the common share closing sale price on the NYSE on January 17, 2019.