There were 64 transactions in the North American Cannabis sector in March 2019, including 36 private placements, 6 public offerings, 16 mergers & acquisitions and 6 shelf registrations, with a total value of C$3.1 billion. Total deal volume increased by 73% over March 2018 and transaction value increased by 879%. 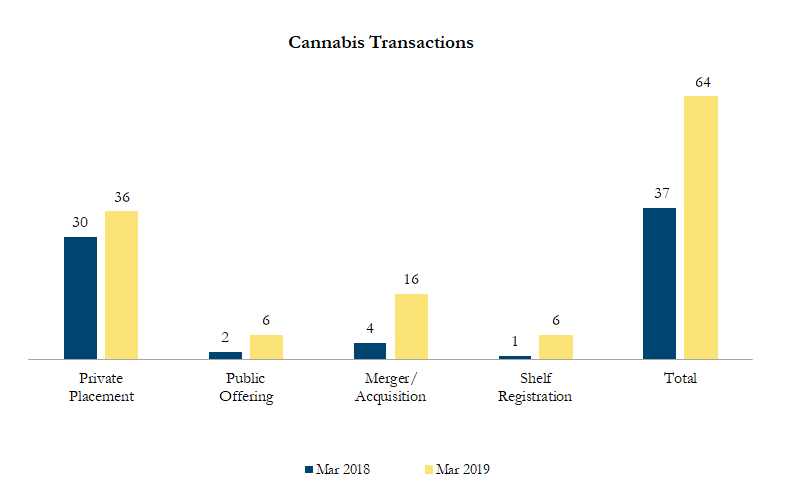 On March 11, 2019 Harvest Health & Recreation, Inc., a vertically integrated cannabis company with one of the largest footprints in the U.S., announced the acquisition of  Verano Holdings, LLC, an arm’s length third party, one of the largest privately held multi-state, vertically integrated licensed operator of cannabis facilities, for US$850 million in an all share transaction. The combined company will be one of the largest multi-state operators in the U.S. and will hold licenses that will allow it to operate up to 200 facilities in 16 states and territories across the country, including 123 retail dispensaries.

On March 13, 2019 HEXO Corp. entered into a definitive arrangement agreement to acquire Newstrike Brands Ltd. for C$260 million.  Both companies produce and sell marijuana in Canada.  Newstrike shareholders will receive 0.06 of a HEXO share for each Newstrike share.  Upon completion of the Transaction, existing HEXO and Newstrike shareholders would own approximately 86% and 14% of the pro forma company, respectively.  The offer represents only a 4% premium over the last undisturbed share price, a significant discount to the Canadian LP average transaction premium of 29%