There were 459 transactions in the North American Metals & Mining sector in first quarter of 2019, including 302 private placements, 34 public offerings, 85 mergers & acquisitions, 4 buybacks and 34 shelf registrations, with a total value of C$164.9 billion. Total deal volume decreased by 12% over the first quarter of 2018 and transaction value increased by 586%. 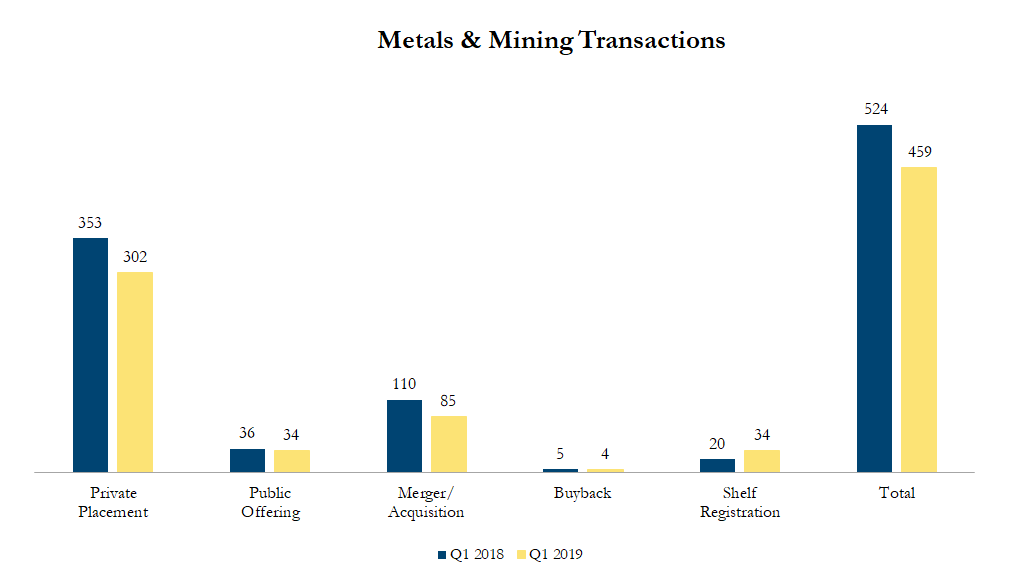 On January 14, 2019, Newmont Mining Corp. entered into a definitive agreement to acquire Goldcorp Inc. for US$10 billion.  Both companies have a variety of active mining operations around the world. For each Goldcorp share, a shareholder will receive 0.3280 of a Newmont share and $0.02 in cash. Post transaction, Newmont and Goldcorp shareholders will own approximately 65% and 35% of the combined entity, respectively.  Upon closing of the arrangement, Newmont will repay Goldcorp’s $400 million term loan and $480 million drawn on Goldcorp’s $3 billion revolving credit facility.  Newmont’s offer represents a 19% premium to Goldcorp’s undisturbed trading price and 1.02x consensus net asset value, which many analysts have deemed too low.

On March 11, 2019, Barrick Gold Corp. terminated its $17.9 billion bid for Newmont Mining Corp, announced late last year.  Barrick had originally proposed to buy Newmont in an all-share US$17.8 billion hostile deal that represented an 8% discount to the prior closing price.  The two companies have since signed an implementation agreement to create the world’s single largest gold producer at the Nevada complex.  The joint venture operations produced approximately 4.1 million ounces in 2018, more than three times the next largest gold operation.