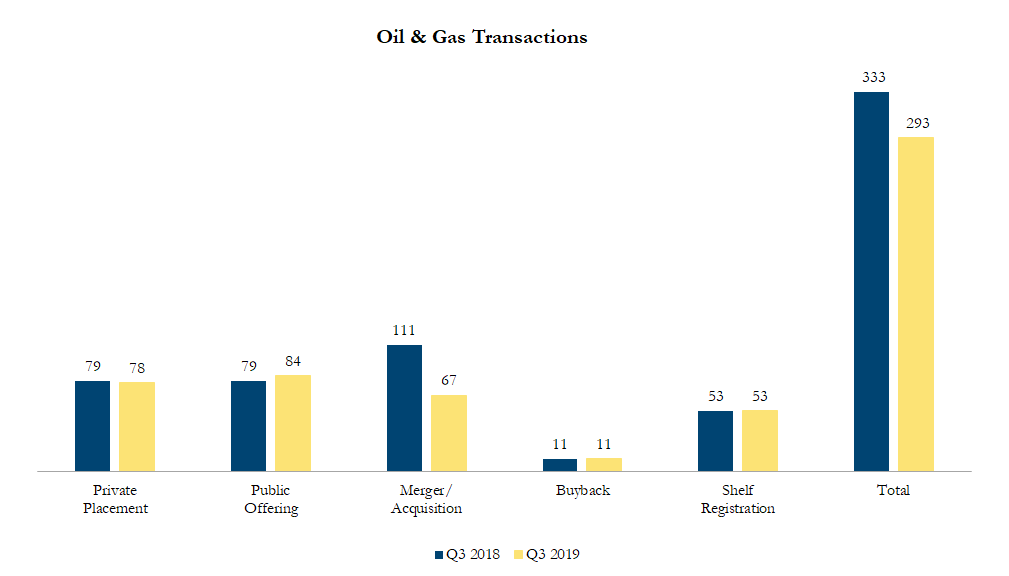 In Q3 2019, there were a number of shelf registrations totaling over $40 billion, a number of smaller private placements and public offerings, as well as M&A transactions under $100 million.

On July 14, Callon Petroleum Company, an independent energy company focused on the acquisition and development of unconventional onshore oil and natural gas reserves in the Permian Basin in West Texas, announced acquisition of Carrizo Oil & Gas Inc. for US$1.3 billion. The all share transaction represents a 25% premium to Carrizo’s last undisturbed trading price. Following the announcement, Callon’s stock price fell by 36%, resulting in $530 million loss in shareholder value. The transaction was met with disapproval from Paulson & Co, who urged the Board and management to explore sale of the company instead.

On September 15, Energy Transfer LP, one of America’s largest and most diversified midstream energy companies, entered into a definitive agreement to acquire SemGroup Corporation, the operator of a North American network of pipelines, processing plants, refinery-connected storage facilities and deep-water marine terminals with import and export capabilities, for $1.4 billion. Under the terms of the transaction, SemGroup shareholders will receive $6.80 per share in cash and 0.7275 of an Energy Transfer common unit for each SemGroup share, or approximately 40% cash and 60% equity. The offer represents a 65% premium to SemGroup’s last undisturbed trading price.